I’m in the middle of an unresolved relational conflict, and it has consumed a lot of my thoughts of late. Last Thursday and Friday I discussed this relationship in four different conversations, seeking advice.

Or maybe I was really seeking validation for my point of view.

In two of the discussions, I heard that what I was experiencing sounded hard, and that my state of mind was understandable. I received these words easily. They confirmed my belief that I was the aggrieved party.

In the other two conversations, I was confronted about my own attitude and behavior. I was challenged to stop being a jerk, to forgive, to let go. These words didn’t go down as easily. I flashed angry and defensive as soon as I heard them.

It’s easy to slip into a victim mentality. When I am harmed, it is natural for me to assume foul motives in whomever caused my pain and anyone else who takes “their” side. When I’m hurt, I crave having someone “on my side” to validate my suffering. 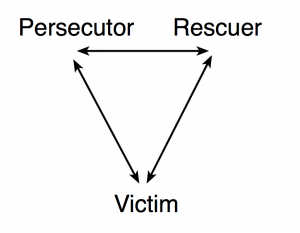 Psychologists use the Karpman Drama Triangle to help explain what happens in our minds when we get in a “victim mode” of thinking. There are 3 roles in the Triangle: the Victim, the Rescuer, and the Persecutor. One of the key dynamics of the triangle is that when an individual slips into Victim mode, he will lose sight of the bigger picture. Instead of recognizing that “it takes two to tango,” a Victim will believe he is powerless to change his situation.   This leads to a very specific type of black-and white thinking, in which everyone else involved in the drama is either a Rescuer (“You’re with me.”) or a Persecutor (“You’re against me.”). Those who agree with the Victim are welcomed into the Rescuer camp. Those who disagree with the Victim are tossed into the Persecutor camp.

What Victims can’t see is that those who are against their ideas can still be on their side.

“You’re part of this system, and therefore part of the problem” is likely what we most need to hear when we’re playing the Victim.

In most of our important relationships (family, friends, colleagues), we will get hurt or harmed at least occasionally. Sometimes the offense is intentional, and sometimes it is accidental. In both cases, the healthiest posture we can adopt is forgiveness— letting go of the right to have the offender punished. Our vengefulness towards others can harm them, and it harms us. It is toxic to our own souls, like drinking the poison we intended for someone else.

I think the only way out of this prison of my own mind is more forgiveness, more compassion, and more open-heartedness towards my “persecutors”. Success on this journey is not perfection, but rather maturation— increasing my threshold and tolerance for injury without slipping into Victim mode. Hopefully I’ll keep growing here all my days.

I’m grateful to the friends who counseled me to “stop being a jerk, to forgive, to let go” last week. I believe we can all benefit from having others in our lives who care enough about our welfare to call us out.

Even though their words stung, they were clearly on my side.