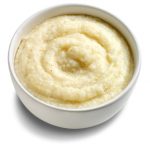 I’m fairly proud of my vocabulary, but I was embarrassed to admit I didn’t know what that word meant.  “It’s mush,” he said, “It’s tasteless, and there’s nothing there to chew on.”

I was at Guidant Corporation, and we were being acquired.  He was a VP in charge of integrating the two companies’ sales forces, and he was describing the messages we were producing to educate our employees.

We then had a conversation about whether these messages were even worth publishing.  Would we lose credibility by saying nothing real and nothing new?  Would people be less likely to pay attention next time, assuming we had nothing meaningful to say?

That was 2005.  In the intervening years, I’ve discovered how rare it is to have a leader ask such questions, to demand more than safe and mushy messaging.  Many leaders navigating their organizations through disruptive change don’t have that same instinct, and end up communicating either Pollyanna messages (“Guys, isn’t this great?  The future is sunshine and roses!”) or messages that are so general, no one understands how the changes will affect them.  In those organizations, the messages are usually very well-written– but good writing and good communication are two different things.

Jodi Underwood, the Director of HR at Citizens Energy Group in Indianapolis, helped me develop a model for communicating effectively during times of change. 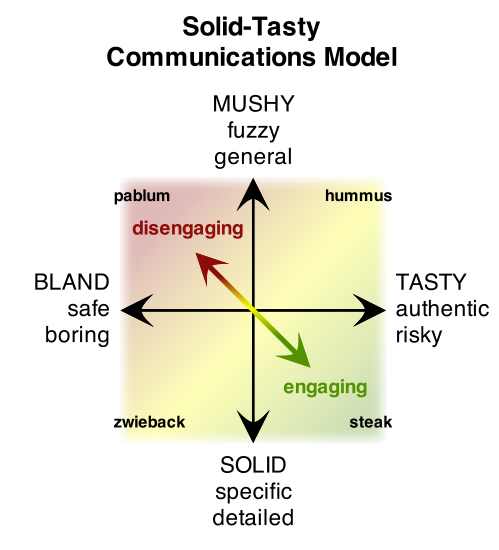 The model has two axes.

The x-axis reflects a message’s level of authenticity.  Oftentimes, leaders assume that “safe” messaging is the safer route, because they can avoid controversy and tough topics.  But it isn’t safer.  “Safe” messages generate boredom and disengagement, which are riskier in the long run.

The y-axis reflects a message’s level of specificity.  Sometimes during an organizational change, leaders can’t be as specific as they’d like, because the details just haven’t been worked out yet.  In those cases, I advise leaders to start figuring out the details that matter to stakeholders, as quickly as possible.

Should leaders then wait to communicate until all the details have been hammered out, and politically it is feasible to speak more plainly?

Absolutely not.  Nature abhors a vacuum, and people will fill the communications void with all kinds of creative scenarios, none of them good.  Communicate now, with what you have, but always fight for more authenticity and more specificity.

The gravitational pull of planet Status Quo drags us up, and to the left, on the model.  We must actively invest energy into moving down and to the right.  But it’s worth the investment.  Real and detailed messages stimulate new ideas and questions in people’s minds.  They open up lines of communication and invite others into a dialogue.  They drive deeper engagement, which leads to higher levels of commitment and less resistance to change.