I had a lot invested emotionally in the name Catalyst OC. The name of the company I founded had become part of my identity over the past 9 years. Even though I am now excited about being Kairos, a few months ago I wasn’t. Initially I rejected the name Kairos. In fact, I rejected the idea of changing the name at all.

I had asked Daniel Herndon from MilesHerndon to help us sharpen our marketing approach. In assessing the strength of our brand, he discovered that a critical mass of our clients and colleagues didn’t know the name, didn’t really like it, or associated it with only one of us on the team. He recommended we consider rebranding, in order to better communicate our unique values, approach, and philosophy. I agreed. But it turns out I wasn’t really ready to let go.

William Bridges was an English professor until 1974. From that point until his death in 2013, he devoted his life to helping people navigate change. He became a change guru, creating one of the simplest and most powerful models in the field of organizational change management—the Bridges Transition Model. 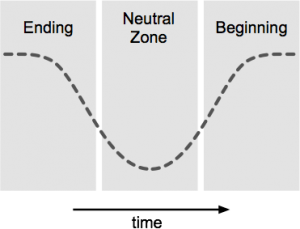 Bridges drew a distinction between two words that most people consider synonyms—change and transition. He defined change as an external event, and transition as an internal process, or a reaction to a change. He observed that people move through three phases of transition as they experience a change:

My experience validates that these phases are real and helpful to understand. Here are a handful of lessons I (re)learned as I went through my own Ending phase:

Mourning a loss takes time, and can it be painful, but there are actions we can take to help each other through transitions. Early on in the rebranding process, I clung to the name Catalyst OC. Even though outwardly I stated I was open to a new name, internally I was reluctant to abandon the word “catalyst.” Out of 11 possible brand names I seriously considered, 5 of them had “catalyst” in them. I struggled to switch, even though there were compelling reasons to change. What helped me most was time—getting used to the idea of a new reality. What also helped was fellow team members (Christin and Alyssa) showing authentic enthusiasm for a new future state. And they provided good emotional support as I let go: “Chip, you’re grieving the loss of what you had. It’s normal. You’ll get through it.”

Engagement leads to quicker and deeper commitment. Christin and Alyssa went through their own Ending phases much more quickly than I did. Although they had less invested in the name Catalyst OC, I believe the bigger factor is that they had their fingerprints on the new identity. No one asked them 9 years ago if Catalyst OC was a good name. This time, they were actively engaged in the process, so they felt ownership of the decision and the result. Their buy-in meant they were going to actively ensure the rebrand was a success. Engaging them early and often in the process (in this case, fully engaging them in the entire process) led to quicker transitions for them.

It’s hard to read the label from the inside of the bottle. As an outsider, I can observe others’ transitions fairly easily; in fact, I do it all the time. But when I’m experiencing a change (even one I initiated), I’m less aware of the broader situation, and I rarely pause to observe my own transition. But it was very helpful when Alyssa and Christin pointed it out to me, so I could see the bigger picture. In fact, we’ve found that one of the most helpful actions we can take with individuals struggling with change is to simply show them the Bridges Transition Model and explain how people experience transition. It calms them down by providing a context of normalcy for their emotional journey.

Next month, Christin will talk about our journeys through the Neutral Zone, which we sometimes (melodramatically) call “the dark night of the soul.” Stay tuned.