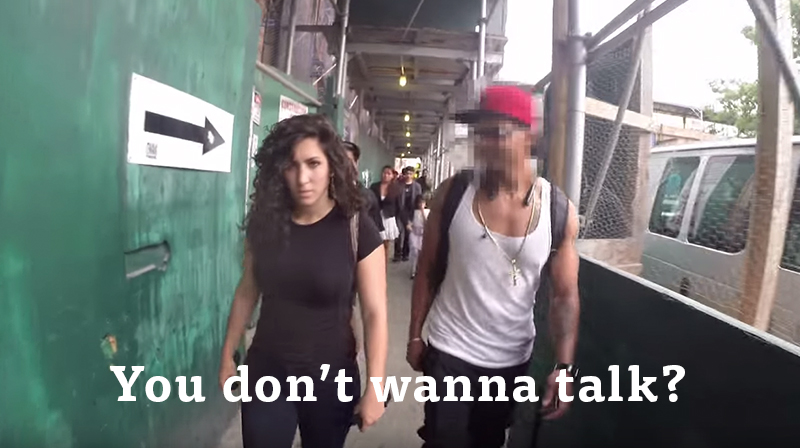 10 Hours of Walking in NYC as a Woman has attracted a lot of attention. The 2-minute video shows a woman walking down the street (minding her own business) in Manhattan, and how strangers treat her.

A grassroots initiative called Hollaback! partnered with Rob Bliss Creative to capture 10 hours of video of Shoshana Roberts. The footage was edited down to the 2 minutes we see. The video does a good job creating emotional impact; we can empathize with Shoshana as she walks the gauntlet of less-than-courteous men. The video has been viewed 35 million times (as of Nov 10, 2014). Clearly it has struck a chord.

But is Hollaback’s approach going to result in sustainable transformation?

To drive durable change, persuasive communications require two key elements: a clear vision of the future and a meaningful call to action.

A clear vision of the future requires a sharp contrast between what is, and what could be.

Much of the online conversation about the video has centered on which catcalling behaviors are inappropriate. This isn’t a worthless conversation, but it muddles the point. By including both marginal (friendly greetings from strangers) and clearly inappropriate behaviors (invading her personal space for 5 minutes), the creators of the video lose control of the narrative. What is the audience being invited to believe?

Here’s a sticky headline we could use:

This message increases the contrast between the current state and the desired future state.

We could create an even sharper distinction by cutting out the marginal behaviors, leaving in the most inappropriate behaviors, and adding in examples of gentlemen treating Shoshana like a lady (assuming that happened during the 10 hours of filming).

A meaningful call to action clarifies the most desirable behaviors—the ones that will make the biggest difference in driving change.

To be fair, there is a call to action in this video— a request that the viewer donate to Hollaback! That may help with street harassment indirectly, but it is less than ideal. How about an alternative approach, one designed to directly shift the attitudes and behaviors of some of our stakeholders?

There are three stakeholder groups involved in this issue: catcallers (those who harass), targets (those being harassed), and interveners (those who witness the harassment).

Here are some meaningful calls to action for the different groups:

There’s nothing inherently wrong with investing in Hollaback! with a cash donation, but an investment of energy in deliberately changing these behaviors would drive more durable and meaningful change.

A clear vision of the future and a meaningful call to action give our persuasive communications a fighting chance to actually make a difference. It takes more effort than some are willing to invest, but a little effort here can pay big dividends.