Recently I helped a client’s executives craft key messages about a disruptive change they were implementing. It struck me that the change was complex, the messaging was complex, and that the organization’s employees were going to be lost and confused. 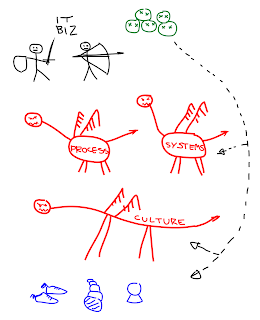 Once upon a time there were two valiant knights, named I.T. and Biz. One wielded a sword and shield; the other a bow and arrow. They had a very successful year protecting the local village from marauding ogres [representing the successes of the past year- note the pile of green ogre heads]. They celebrated their banner year with several tankards of mead and then slept off their bender in the village square.

They were awakened late the next morning by the sound of enormous flapping wings. They looked up with bleary eyes and saw a massive form blocking out the sun. As their heads and eyes cleared, they saw the tail end of a monstrous red dragon pass over the treetops into the forest.

Our heroes sallied forth into the woods on a reconnaissance mission. After some investigation, they determined that not just one but three dragons (yikes!) had moved into the neighborhood. The first two were twin dragons. They were fat, mean, strong, and stupid. The older of the twin dragons had the curious name of Complex Business Processes. His younger twin brother went by the moniker Complex I.T. Systems. These two were strong and tough, but tended to be a bit sluggish and predictable. The third dragon was more dangerous. He was long, slippery, and treacherous. He had a poisonous bite, and some even claimed he had the power of invisibility. He had various names, including Culture, The Way We Do Things, and We’ve Always Done It That Way. When fighting the twin dragons, it was wise to keep an eye out for the third, which slipped behind opponents unnoticed until it was too late.

Our heroes continued their reconnaissance and discovered the dragons’ lair. In addition to the mounds of gold coins that filled their cave, the dragons guarded three precious treasures. The first treasure was Mercury’s Shoes, winged footwear that enabled their owner to travel with great speed, flying above the entanglements of the forest floor [representing productivity and efficiency]. The second treasure was the Cornucopia, which magically produced whatever its owner imagined [representing rapid product development]. The third treasure was the Crystal Ball, which enabled its owner to see things as they really were, and as they will be [representing business intelligence, for fact-based decision-making].

Fighting and decapitating ogres last year taught I.T. and Biz some valuable lessons, including that they were most effective when fighting alongside each other, since their separate weapons had maximum effect when combined. They would incorporate that learning into their plan to battle the dragons.

They expected to get charred, clawed, bit, and poisoned in their fight. But they reasoned that those wounds would heal, and they would then be stronger for having engaged in the battle. Our heroes believed in their hearts that the three magical treasures were worth the fight. And what was the alternative? To let the dragons consume the village, one damsel at a time?

Our brave knights had pure hearts and the strength of ten. They would not allow that ugly future to come to pass. So they took up arms, said their prayers, and entered the dragons’ lair.

After I told that story, there were several smiles around the room. Folks love a good fairy tale, and the executives now understand the key messages that had been dry and inscrutable before I put them into my Medieval blender. They also understand that the rest of the story is unwritten, and that the future of the village is in their hands.

The lesson? Stories and metaphors stick. The client’s employees are now talking about knights, dragons, and treasures. We’ve created a simple, common language that engages employees at all levels in the project’s strategy and vision.